Still don't know how to add photos. It isn't liking me but we have a top ten of the trip to Branson!

10 days total (counting driving days)
9 kids in one car
8 hours at Silver Dollar City, and lots of roller coasters
7 hundred bug bites (no official tally but there are a lot of bugs in Missouri)
Six. The concert for the girls night out (awesome!!)
5 trips to the swimming pool (there might have been more, it was an awesome pool)
4 different condos
3 fish caught and released (following the "secret" trail to the water, Sam declares there wasn't any trail at all)
2 days of boating
1 awesome family reunion

Alternately, we could have thrown in number of grandkids (16), hours of games that were played, chess games played (Hannah and Johnny spent several hours one afternoon playing chess), shopping deals found (Tabby wins for her Disney dress), miles driven, states that were driven through and that we all came from (we drove across 5 and all the boys came from a different state), photo ops, photo bombs, desserts concocted, meals consumed, grocery store trips, and of course how many people came home sick.

It was a ton of fun. Even the driving wasn't too terrible, amazingly enough. The resort was a great idea, lots to do close by to help with babies and parents needing naps. Food was amazing (ham, pulled pork, taco salad, all the hot dogs Ben could want, pizza, and lots of ice cream). Stories were shared from childhood and memories made. The whole commune living was fantastic. We got really good at counting kids and double checking that everyone was accounted for.

Is it too early to start trying to figure out where to go next time? (I request a shorter drive this time if possible.)
Posted by AJ at 5:40 PM No comments:

I do like how Google is throwing together a story from the photos that people have taken at a particular place and time:


Posted by InnocentBystander at 11:24 PM No comments: 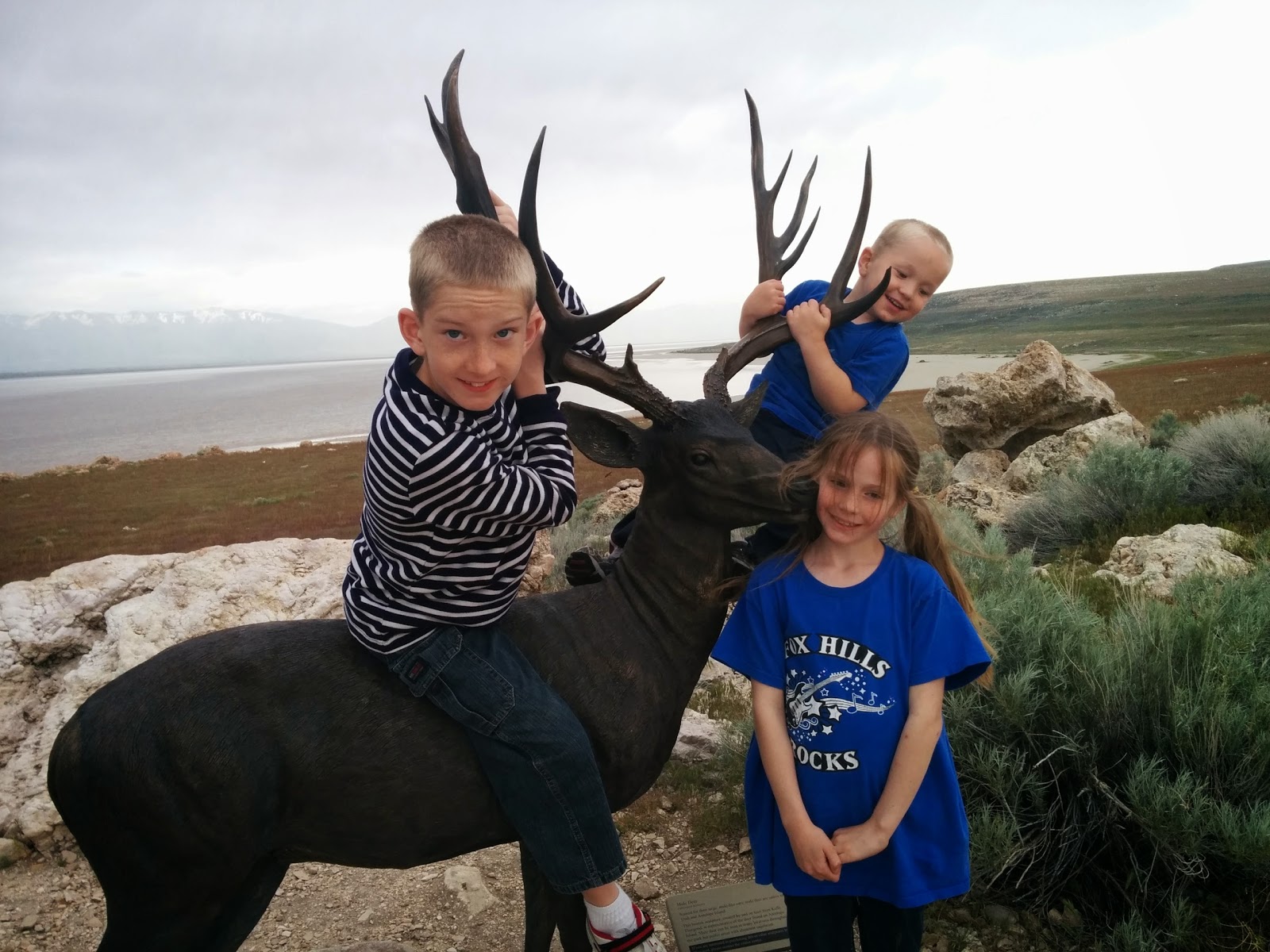 First the awesome - there is a big lake with an Island that we haven't really explored with some awesome beaches! 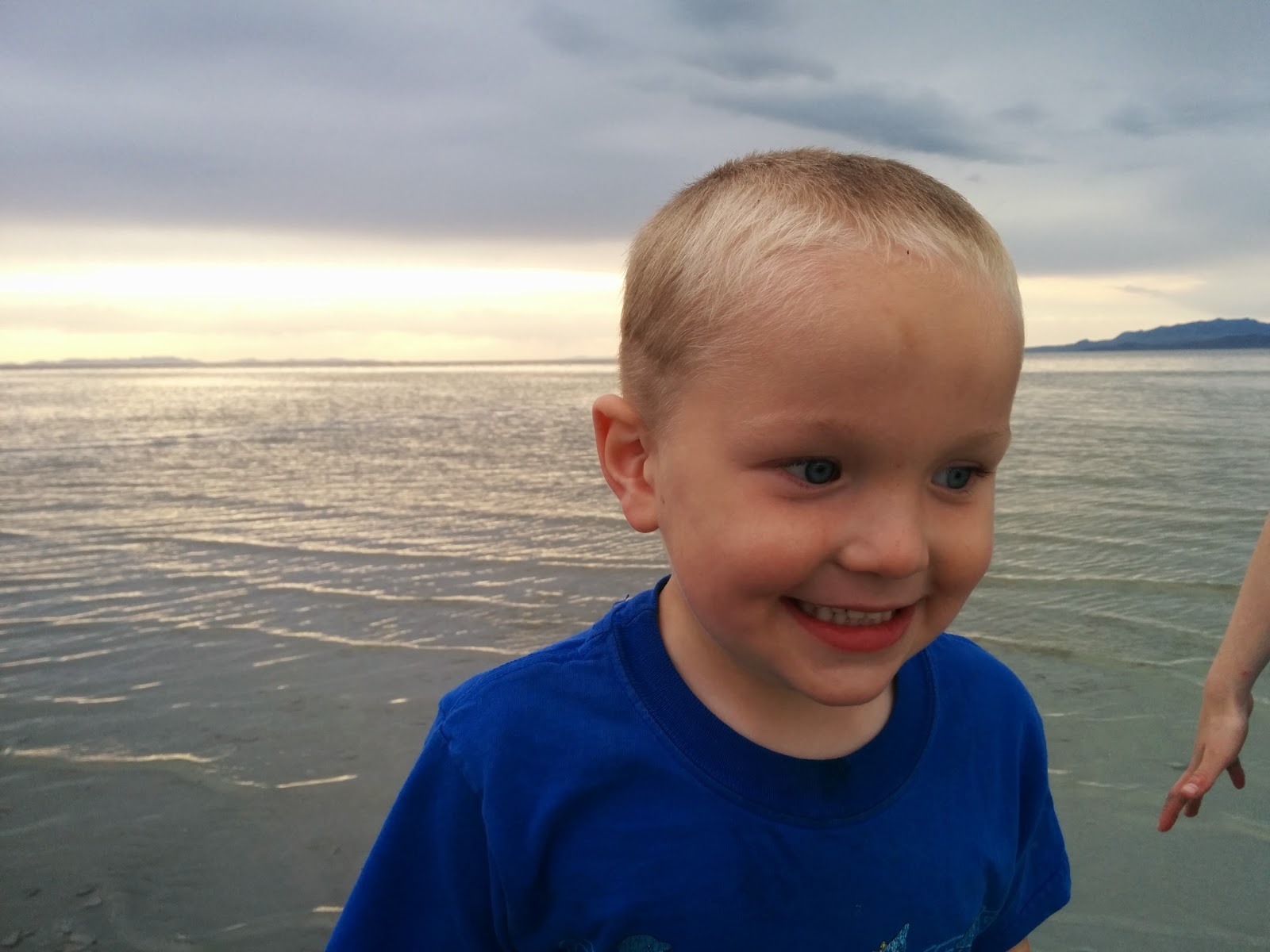 Here Ben is expressing his joy at throwing rocks in the lake!

And here is a cool 360 degree sunset shot! 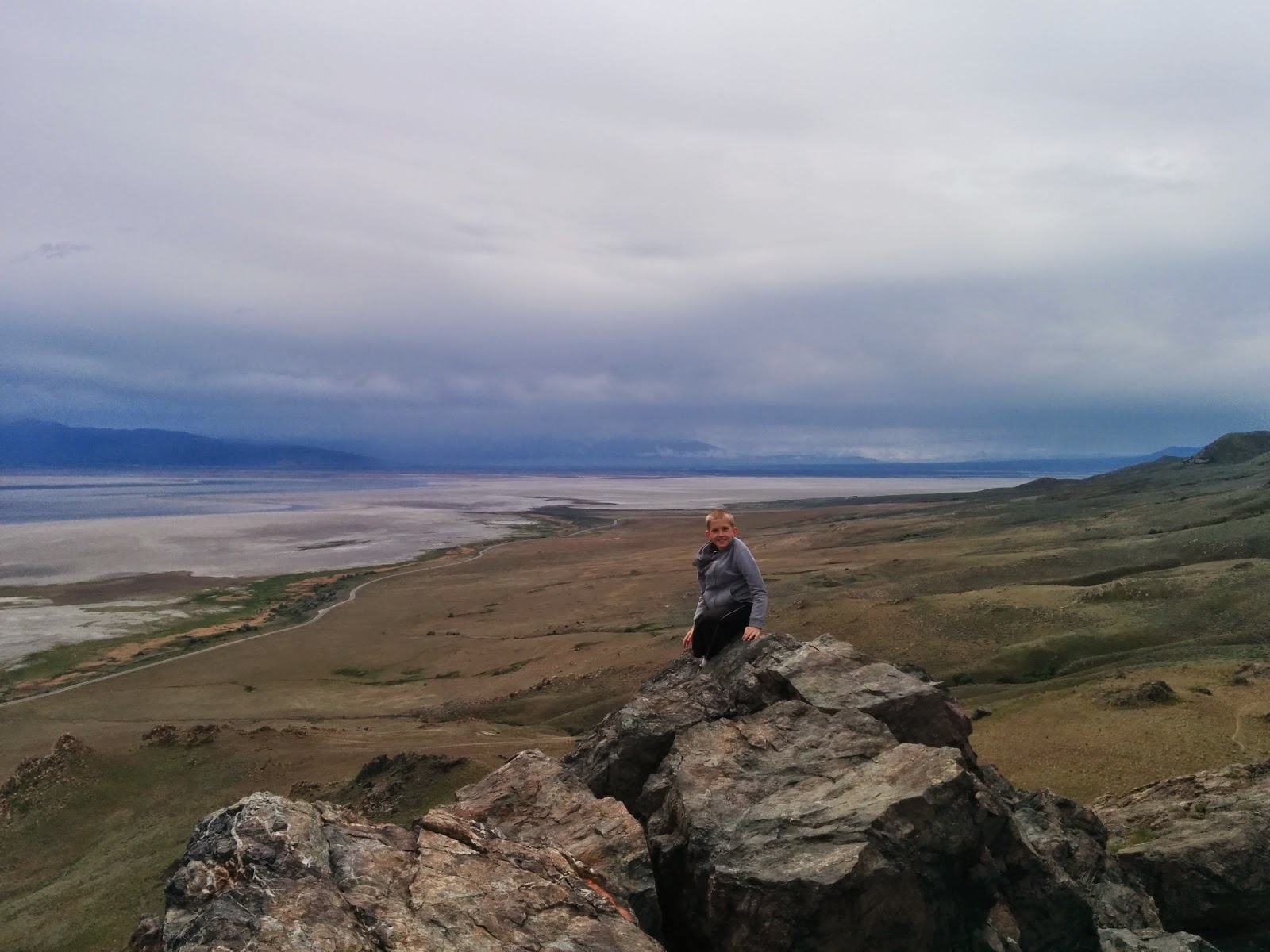 And finally here is Sam on one of the high outcroppings.

Those were all the awesome things about the trip.  Now on the dark side - the invisible biting gnats!  (Note, the graphic has Cedar Gnats - I think the Great Salt Lake ones were related but weren't called Cedar Gnats - rather the horrible Gnats from hell) 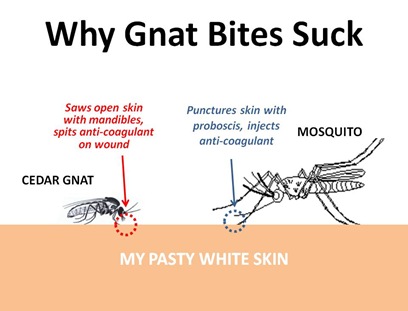 These guys are horrible.  Luckily for most of the trip the wind was blowing pretty well, which confined these little guys to the bushes everywhere.

However, when we were packing up the wind died down.

Which turned into a very high pitched buzzing...

And then the kamikaze attacks started...

Luckily I had sent the kids into the van while I hooked up the trailer.  My mistake was thinking that I could manhandle the tent trailer onto the trailer hitch without any issues.

I folded up the trailer with one hand, the other hand being dedicated to wildly swiping the gnats.  I would have preferred being attacked by a cloud of mosquitoes - at least I would have been able to see them and smash them.  These guys are small enough that you don't see them clearly unless you have a microscope.  All you can see in the air are these little dust motes with jackhammers and chemical weapons.

After moving the van into place to hook on the tent trailer, I realized that I would have to again go out and manhandle it onto the hitch.  This would require both hands.  Arrgh!

I took a deep breath, ran out yelling, and muscled the tent trailer onto the hitch, connected everything else, took a good look at everything again because there was no way I was going back out there, and dashed back into the van.  I look down at my arms and feel my neck - it looks ok initially...

12 hours later I'm counting the bug bites on my arms, on my neck, and in my hair!  At least 2 dozen, all within the 5 minutes I was out putting the tent trailer back on the hitch to leave.

We had fun, just won't be back until September or later when all the flies die down.  :)

No pictures with this post because my computer has decided it doesn't like doing that I haven't tried to figure out why (maybe tech support can do it sometime).

We have had a great year so far, Justin and I got to go to England for a bit (just over a week for me and three weeks for him-work and what not). That was great. We have lots of cool pictures that I would love to be able to share. We went to Stonehenge, Wales, castles, some more castles, a cave/mine, more castles, secret WWII tunnels (not so secret anymore but still cool), saw old churches, old buildings, some cathedrals, walked around London, several museums (most museums are free in London, it was great), drove in the countryside, walked in the city, and saw Wicked. It was awesome. My new knowledge of England: no stop signs, some lights and LOTS of roundabouts; the countryside is full of sheep; London is crazy busy; after a couple of days all buildings look old and it is hard to care as much. I will try to put up some pictures at some point.

We got a dog (finally as the kids will add). We found a black lab/collie mix for sale. He is just over one year old and is an outside dog. The kids love him and he is a great dog. He does have a lot of energy and sometimes knocks over small children with his exuberance. He loves it when the kids come out to play. He follows them around and often just sits and watches them play, unless tennis balls or sticks are involved and then he has to be a part of their activity.

Hannah was baptized. She was very excited and I really need to post some pictures of that event. It's a big deal for her to make that decision. She received a journal and now writes in it every Sunday. She is a very talented and smart girl. She loves to draw and she loves being the leader of any imaginative play going on.

We had another bout of asthma/respiratory problems for Ben during spring break. Four days in the hospital (where we learned he loves to paint with water, who knew). Justin and I alternated days at the hospital and days spent with family for Amber's wedding. Her wedding was a lot of fun and it was fun to hang out with family and see old friends and neighbors.

Coming up we have soccer, piano recital, end of school, summer activities (Sam is set on doing concession stand), hiking and camping, and whatever else fun we can fit in. There is a brief update, sorry no pictures, hopefully someday.
Posted by AJ at 12:27 PM 1 comment:

Here's a glimpse of our year in review in photos. 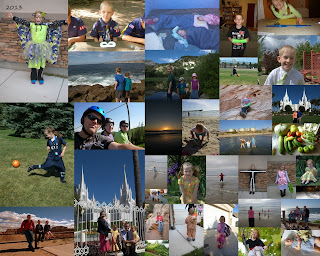 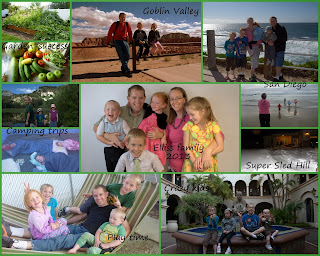 This is the whole family one: we went to San Diego, played in the snow, went camping, explored Goblin Valley, and had a massive garden among other things.
Hannah's year 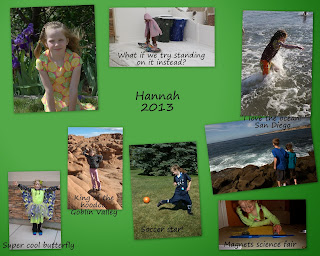 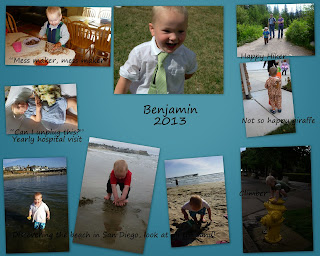 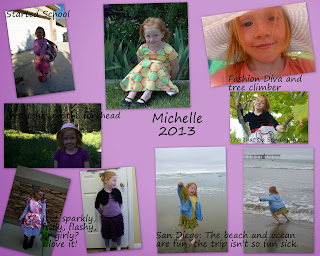 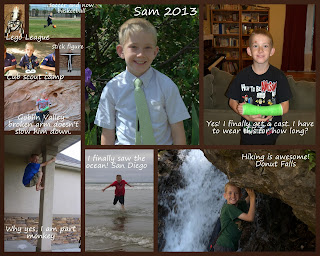 We're going to do a more extensive post later on regarding most of 2013, but Sam (now age 9) wanted us to put this up so that he could share his first coding experience.  It's from Khan Academy, which he really likes so far.  This specific one is the hour of coding.

It's the Three Snowmen wishing you all a Happy Holidays! 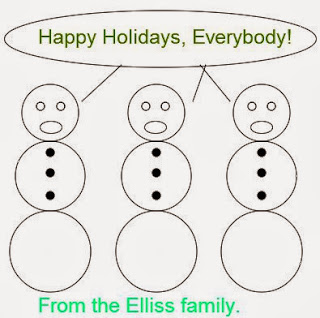 Here's the coding behind it:

We have had an adventurous month it seems and I will try to get some photos up of our activities. But up first, Halloween! I quite like Halloween. Pumpkin carving, Wilson family pumpkin party, costumes (which in my mind means time spent sewing and designing) and candy. 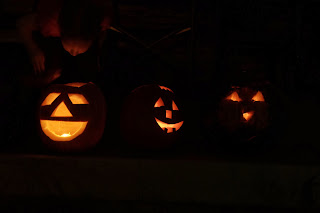 Here are a couple of our pumpkins. These are home grown this year! Sam's is on the left and looks a tad creepy since it is slightly out of focus and he had pushed the mouth piece back in. Michelle's is the middle on with the fringe hair on top. The one on the right is Ben's with Dad's help (a lot of Dad's help). 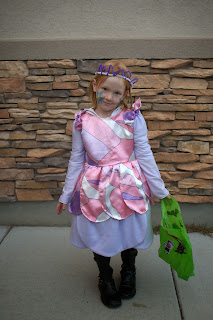 Michelle was a fairy. I love this dress. Easy to put together but really fun as well. 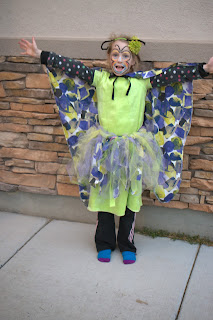 Hannah wanted to be a butterfly so we made up this costume for her. She loved it. The face painting leaves something to be desired but we tried it this year. A little too big and too much. 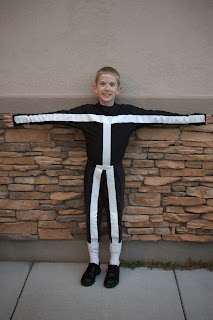 The Stick Man. At first he wanted to be a ninja again and I convinced him to try a stick figure, but we went for white on black instead of black on white which is what helped convince him. He loves it and still wears it. (It is just duct tape.) 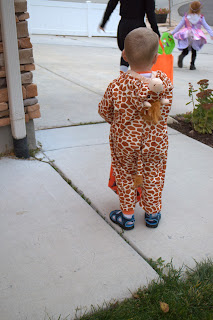 Ben got to be a giraffe this year because his costume wasn't done yet when he decided he needed to get sick and spend quality time with mom or dad at the hospital. It was cute, cheap and just a tad small but oh well. Jake from Jake and the Neverland Pirates will have to wait (although it is mostly together and would finish up fast so maybe for Christmas).

There is a brief look at our recent adventures. We have more: the hospital visit mentioned above, hair cutting, science fair projects, and a camping trip to name a few.